The government’s decision to distribute one kilogram of free pulses of the variety preferred by states instead of the vareity abundantly available in its stock seems to be delaying the PM’s Garib Kalyan Yojana’s national roll-out. Sources said of the 2-2.1 million tonnes of pulses with […]


The government’s decision to distribute one kilogram of free pulses of the variety preferred by states instead of the vareity abundantly available in its stock seems to be delaying the PM’s Garib Kalyan Yojana’s national roll-out.


Sources said of the 2-2.1 million tonnes of pulses with the government, under the custody of Nafed, 1.6-1.7 million tonnes, or almost 80 per cent, is whole chana, which can be consumed in the same form. The remaining is arhar, masoor, and moong. Sources say states want the pulses in their polished ready-to-use form, instead of raw.


As most pulses processing units (dal mills) are closed due to the lockdown, the government is finding it hard to get the whole pulses polished for distribution to states. That apart, overcrowding of processing units could lead to shortage of pulses in retail market, as very few of them are operating.


As a result, sources say a little over 1,000 tonnes of pulses had been sent to the states till last week, while the requirement was around 195,500 tonnes per month. Nafed sends pulses to the state government and from there it is the responsibility of the states to distribute them through ration shops.


In total, in three months, starting from April, around 590,000 tonnes of pulses will have to be distributed for free to over 195 million families under the Garib Kalyan Yojana package, in line with the announcement made by Finance Minister Nirmala Sitharaman last month. 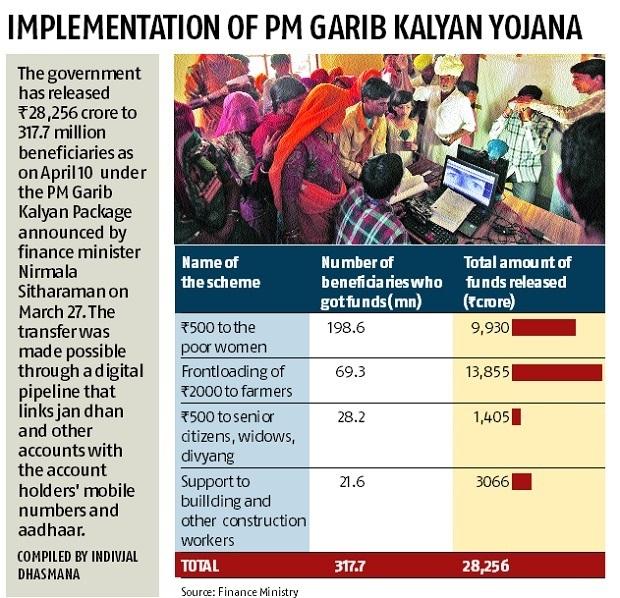 Distribution of free chana under the package could also have helped in clearing inventories and speed up fresh procurement from farmers, which has started in the past few weeks.


“If states weren’t given the option of selecting their own variety of pulses, the distribution of free pulses could have been hastened, as biggest variety of pulses in the stock is chana, which can be consumed without processing,” an official said.


Despite all the hiccups, Nafed has delivered the full three months’ quota of free pulses to Andhra Pradesh, Telengana, Gujarat, Haryana, Goa, Chandigarh, and Andaman & Nicobar Islands under the package, according to a recent tweet by the farmers’ cooperative.


Nafed has bulk of its chana stocks in the states of Madhya Pradesh, Gujarat, Haryana, Rajasthan, where free pulses distribution could have started from April 1 itself, as no transportation was needed. “Chana is India’s biggest pulses crop and high in protein, so efforts should have been made to push it,” another official said.


At around Rs 65 a kilogram, chana dal is the cheapest available variety of pulses in the country at present, perhaps a reason why states are not showing much interest in its free distribution.